Nine months after we signed the contract we have moved into Palm Villa- our new home in Duncan BC on Vancouver Island. 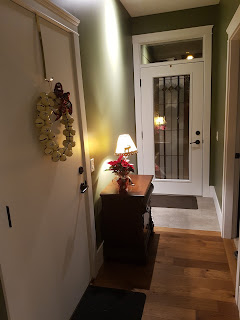 We had three moving guys- one with lovely biceps, who worked from 1030 till about 5 in the afternoon. New friends Carol and the Two Brendas- one from Victoria and one from Ladysmith put their back into unwrapping a ton of boxes and tah-dah!


It was a tiring but a very exciting day. Most of our main level is put away but the lower level is still a bit scattered. I'll work on that this week. Most of our "stuff" arrived in good condition.
Some not so good.
We had breakage.
I did my best when packing but ultimately it was the handling along the way.
There are items missing too- like an oak dining room chair.
Our bicycles are missing bolts that hold on the fenders.
Our patio table is still in pieces because the bolts can't be found.
I asked one of the nice moving men way back in August NOT to take the table or our bikes apart.
They did anyway.
&^%$*

We had the back of an antique harp-back washstand damaged. Someone had glued it back together and wrapped it in tape! Nice one.
Tape on an antique piece?
What can you do?
We will be putting in a claim.
I am also missing two mantle lamps and an antique "Gone with the Wind" lamp.
I hope I find them in a box today.


I will begin work on re-assembling Swisssh and Starlite later today and who knows, maybe they'll be back on air tomorrow.


Tom and I are so happy to be in our new Island Home. WE are grateful to be mostly settled and feeling a part of this Cowichan Community.
Cowichan means "warm land" you know.


We are also grateful for our new Island friends- Victoria Brenda, Ladysmith Brenda and Carol.


Oh yah...one Christmas Tree is assembled. It's lights are glowing but naked otherwise.
It's on my "to do" list.