You know those cigarette packages with the nasty pictures of rotting lungs and dis-coloured organs?
You see them lying around trash bins, on street corners, at bus stops, on the lawn at local Secondary schools and outside those cheque-cashing stores. 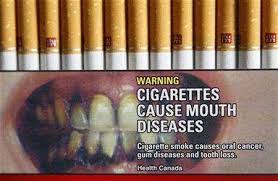 I got to thinking that I could add a few more warnings regarding why a person shouldn’t smoke.
Maybe those pictures of rotting, puss-oozing gums are just not frightening enough. Maybe Health Canada needs to slam smokers where it really hurts- in their self-worth.
So, I sat down at my typewriter, lit up a Player’s Plain and as I blew smoke towards the ceiling, I came up with these few gems below.
The top15 additional warnings that could be placed on packs of ciggies.
Smoking can cause…
you to look refined- in a bad way.

you to leave your children motherless or fatherless.

you to smell like a backed up sewer. (use a New York accent)

you to lose friends.
you to never reach middle-age.
you to appear lazy.
you to look like a street person wandering without a purpose.
you to look “cool”. 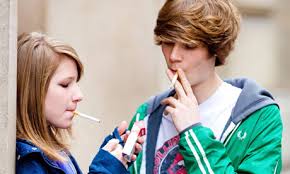 Okay with that last one, I’m yankin’ your chain here.
Cool?
I don’t think so- James Dean aside…

(If you have others to ad. Just make a comment below using anonymous in the drop down menu.
You can still add your name in the body of the note- if you like.)