What in the name of living Bejezus is goin' on?

I don't know what's happening in this country CANADA of ours but it must be something in the air.
The right-wing, anti-immigration, anti-gay, anti-everything faction of Alberta politics is surging ahead. Federally the Tory's are knocking on the door. The NDP are fading into oblivion with what's his name. The "People's Party" is running candidates federally.
How long will it be before swastika-wearing people will be strolling in parks and malls on Saturday mornings or lighting crosses on fire on Sunday nights?

That Asshole Doug Ford is giving the Ontarians- who overwhelmingly voted for his candidates, exactly what they deserve. How do you like him now? It's not that you didn't have plenty of warning. Remember brother Rob- the drug kingpin, drunk in public, high and cursed by not only Torontonians but folks around the world? I remember folks sitting next to the Mister and I in London a few years ago. They were having a good chuckle and wondered how such a man could be Mayor of Toronto. I expect now they'd be on the floor with their sides heaving from laughter knowing Douggie is in control. Of course all they can think about these days is Brexit and their PM Theresa May.
Can you say mess?

Back in Ontario there's Tory Blue on provincial licence plates coming in the future. They're cutting education and teachers. Increasing classroom numbers. Now, he is about to pass legislation that pretty much ensures he or his government can't be sued. Now, why would a political party need something like that in place?
Look out Ontario!

Look out Canada!
Look out Justin!
Right now, for the first time I couldn't care less about politics in this country.
The righteous Jane Philpott is speaking out on television hinting she may join another party.
Who the fuck will you align with Jane?
A Liberal going to Scheer's conservatives all to get back at the party that fired you- and rightly so.
The Liberal Caucus should have kicked you and your sidekick Jody out of the party back in January.
That whole waste of time was an Indian VS White thing. The same thing that's been going on in this country for years!
Get over it! It's 2019!
Cripes I'm surprized the French are quiet these days!
Aboriginals got your tongue?

I used to be supportive of the French in this country. The history and heritage. However, one morning I looked at my Rice Krispies  box and thought- enough! Join the Americans and they'd build a wall around you before you could say Rene Levesque- rest his soul. (Wait, he didn't have one...)
We had a French-Canadian couple join us in our elevator in Honolulu a week ago. They could barely spit out a "hello".
I mean we understand Bonjour, if English leaves a bad taste in your mouth- and oh, what's it say on that passport in your bag? CANADA?...


Today, the polls are showing Scheer ahead of little Justin. I am not surprized what with this SNC mess and the two gals I mentioned above. Two MP's bringing down a government.
My, these girls must be proud. Very proud- and to what end?
Put on your bug girl panties and get on with your life.
Guess it's more important to support a right-wing, hateful party taking control.
It's in the cards- and polls, folks.

Everything we have in this CANADA of ours is up for change.
Gay men and Women- look out. We may have our freedoms now but that can change in a heartbeat. Within 10 years they could be scooping us up and throwing us in camps.
Taking away marriage rights, adoption rights and equality in the workplace.
You "straight" ladies may all be barefoot and pregnant again before you know it. Strap on your pearls and keep hubbies slippers and pipe at the ready for he's coming through that door any minute.
I hope you're ready and re-applied your makeup for your man's imminent arrival.

Don't laugh!
It's been done before.
Nothing's forever. Too bad you burned all your bras.
You'll need them. 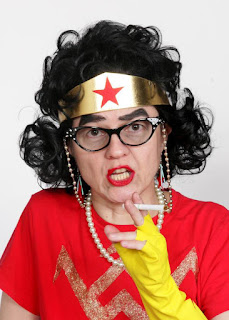 I sat beside two, nice senior ladies in a cafe the other day. Eventually, they mentioned Justin- I can't remember why, then, the roof fell in. Apparently Justin has given 5 billion dollars to a women's movement and yet Seniors need help.
I'm a Senior too Goddammit! What 5 million?
I had no idea what they were spouting off about but I know one thing- they will not vote for Justin.
I said nothing.
The one gal was even wearing "Liberal Red".
She also said during our conversation that when she came with her husband to the Island from Nova Scotia, her church- The Church of the Nazarene" helped.
I said- "Oh, the Church of the Vaseline!"
She slapped my arm.
I said-"Look if it works for you- that's great. I am a member of the Church Of Atheism and I've never met as many "Humanists" anywhere as I have on this Island. She was agasp!
I can only surmise I was the first Atheist she had ever met. I think she was looking for my horns to appear atop my head or fire to spurt from my nose.
Anyway, all in all, she was a nice lady. Her friend was too. The hubbies who sat at a table behind were jolly and seemed to have a good sense of humour.
We had a fun chat.

So, folks, in a nutshell, change is in the air. Conservatism is rampant. Not that it's all bad. The extreme right-wing segment is- I believe.
For Fuck Sakes- live and let live!
I can only hope that Jason Kenny or Mr. Scheer have Gay sons and I mean GAY.
Screaming, lipstick wearing, full on lisping, Queer to the Nth degree GAY...and NOT that there's anything wrong with that. I can be a "Queen" with the best of them in the right company.
It's fun.
It's Liberating.
It's Life.

So take a pill everyone and calm down.
Enjoy life.
Stop the persecution of Gays and blacks and Aboriginals and Muslims and Immigrants of all flavours.
Stop the right-wing cronies.

We are all one big Family of Man- or Woman.
Take your pick.
Be happy.