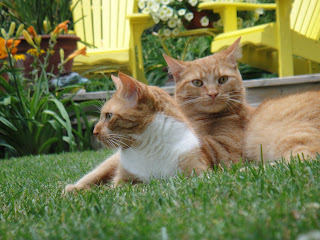 No picture of me this time.

The photo is one of our boys- Dickens on the left and Doyle on the right- staring into the camera lens.
They were eight in June and they came to live with us eight years ago on September 15th.

The picture is not perfect these days.
If you followed the blogs of our journey from Orillia, Ontario to Vancouver Island last year at this time, you may recall that Doyle left us on the evening of August 17th at a KOA Campground in Winnipeg, Manitoba.

I had been writing a blog that evening while sitting at the dining table in Priscilla- our RV. Doyle was laying on the back of the seat just behind my head. He had been there for an hour or more, gently purring in my ear.
It was normal. Things seemed normal.
It's funny how fast normal can turn into tragedy.
Dickens had gone to bed with Tom and our mini-schnauzers Missy and Koko.
I liked the quiet when writing.

At one point I felt the air a bit cool. It was about 10:30 pm August 17th. The door to Priscilla was wide open except for the screen door that was closed to keep out summer bugs. I got up to close the door. It was hooked snugly to the left on the outside of Priscilla. I took a few steps to the door and reached out to grab the outer door latch. As I did this Doyle ran outside in a flash!

I stepped down and called.
He'd come back in a few seconds.

It was pitch black.
I grabbed a flashlight.
I called to a young lady who was parked two doors down, asking if she had seen him.
She hadn't but she grabbed her flashlight and we shone the beams under her RV.
There he was!
Eyes shining wide in the light beams.
I was able to crouch down, grab him and hug him to my chest.
"I have him!"- I called to her.
"I'm glad"- she cried.
Then suddenly Doyle jabbed his back claws into the palm of my left hand.
I don't know why.
The claws jabbed so deep I yelled, releasing my grip a bit. He then jumped up, over and out of my arms. His tail disappearing into the black night was the last I ever saw of him.

I have gone over this scenario a thousand times in the past year and it doesn't make me feel any better.
I had him.
I lost him.
I had him tightly and safely in my arms and he jumped free.
Why?

Back in Orillia Priscilla sat in our drive. Just outside the door to the left was the backyard gate which was propped open when we were in Priscilla. We tried to get the "kids" used to being inside in her but Doyle knew the safety of Pine Tree House was just outside and around the corner...only-
this time it wasn't.
All that lay in the darkness was unfamiliar smells.
Unfamiliar territory.
A deep, dark, black nothing.

I called to Tom awakening him from a sound sleep.
I told him what had happened.
We called and called his name into the night. We walked the perimeter of the KOA.

We left food outside. His litter. A familiar jacket so he could sniff us.
We went to bed.
A fitful sleep.
Even Dickens was crying out. Then around 330 am a horrendous thunderstorm.
Lightening. Heavy, heavy rain. Loud crashes of thunder.
Doyle would be scared.
Our hopes dimmed.

We spent the following day and the next morning after that searching and calling and asking people if they had seen an orange tabby.
Nothing.
The next night the KOA Groundskeeper knocked on our open door saying he saw him with a bunch of feral cats along the shore of the Assiniboine River that cut through the KOA.
We took flashlights.
We called.
We could see cat's eyes in the river grasses but Doyle didn't come running out to meet us.

Leaving the KOA the following morning was tough.
We sobbed salty tears.
The Groundskeeper assured us he would call when Doyle returned.
We had some hope.
I don't know how Tom could see through his teardrops as we drove out of the park and onto the Trans Canada Highway leaving a part of us behind and alone.

We haven't stopped searching all this past year.
Almost daily I check the Facebook Lost Cat Pages for Winnipeg. We have been registered with the Winnipeg Humane Society. Doyle is chipped and if he were found and taken to any vet, the chip would lead him straight home to us- his Dads.

Now a year is up.
I told myself we'd hold our hopes high for a year.
We've seen so many photos of cats that look like Doyle I could fill this page and several more with their photos.
So far- nothing. The leads always fell through and that made us sad all over again.

The best we can hope for is that someone is looking after him.
Good Food.
A warm place to curl up and snooze.
I don't even want to think about the freezing cold temperatures in Winnipeg last winter.
Back in Orillia he might have come out with us for a few minutes on the side verandah in the mild sunshine but on a cold, crisp day or night?
No.
We still have a glimmer of hope but reality has pushed hope way down.
We have to be realistic.

We will miss him forever.
I'd love to hold him in my arms again. Have him snooze on my lap or curl up in front of the fire in a doggie bed he borrows from Missy and Koko.

Dickens had some rough times a couple of months ago. Even he realized his brother was not coming home again.

So, we have memories and we love each and every one.
We hate the not knowing where he is tonight.
Is he safe or what happened that night a long year ago and what about the past 365 nights.

But- enough now.
Goodbye sweet Doyle wherever you are...