ROBBLOG #773- Woke up this Morning, You were on my Mind

March and I have a few things on my mind.

Firstly, have you ever had someone in your neighbourhood who "bugs your buttocks" from time to time? The Mister tells me to "take a pill" and relax but we hear folks have moved away from this person over the years- on purpose!

This neighbour smokes like a chimney and has contraband cigarettes delivered weekly from a noisy, rusty, reddish- coloured van.  I don't know if cigarettes- I presume from an aboriginal reserve, are illegal or contraband but it sure looks that way when the van wheels up in front the house in question and backs up to the open garage door where the neighbour stands waiting- a long cigarette stuck between upturned fingers. Usually, "the buyer" appears first, standing there sucking in all those carcinogens for a minute before the delivery vehicle roars up the street, covertly backing towards the open garage door. When it pulls away all that's left behind is a cloud of grey, smelly smoke and a hazy shadow clutching a box of cancer-sticks scurrying into the house through the man-door in the garage.

The Mister and I always hear the "grand slam" of the door as ill-gotten goods- like a squirrel storing stolen nuts- are hastily taken inside. I don't believe nuts are as injurious to a squirrel as cigarettes are to a human.
How many chemicals are in one filthy, tobacco-infused stick?
A hundred?
I dunno. Something like that.

Oh and another thing, that fucking garage door that the delivery van backs up to weekly is open from morning to night. I questioned "the open door" policy- once.
"Look at the nice view you see when you look out across the street into the neighbourhood and look at what everyone sees in return, nothing but a gaping space where a garage door should be.
"Oh, I always keep it open..."
That was a less-than-satisfactory retort.

On a safety note, open garage doors do invite "petty thievery". Some thieves are out there looking for everyday items to grab and sell, with easy access. The word also gets out that a neighbourhood could be an easy target and there's something worthwhile behind all those "closed" garage doors- besides Mini-Coopers.

Well, I want to thank all those dog-walkers who've let their pooches pee on our front lawn over the past "winter" months. The Mister and I are now the proud owners of a dozen or more brown circles of dead grass. Oh, folks walking by the house are not alone in shouldering the blame here, for a nearby  pooch has "watered" this small green space as well on several occasions.
When we vocalize our dismay with the pooch's owner, we are cheerfully told- while puffing away on six inches of cancer in a stick-
"Don't worry, the rain will wash it away!"
We sigh.
Yes- eventually it will but it also kills the grass in the meantime.
The short end of the story is the plain fact that our front lawn is the size of an extra-large bath towel from Winners, so a few doggy spots really makes the lawn look crap. 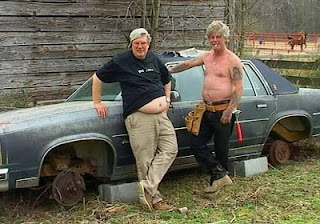 We have new neighbours moving into the hood.
They are not moving from very far away.
They tell us their former neighbourhood is not what it once was and is in a steady downward spiral what with students possessing little respect taking short cuts through a nearby fence along with the litter from area fast food establishments and ciggy butts.
Homeless people roam the area too and druggies pick up needles at an area needle drop-off.

What a world we live in where those killing themselves by injecting substances into their bodies have a drop off place for their old needles, picking up fresh ones in return.
It is just crazy!
It's like smokers who never look at the big picture.
In the end we pay for their medical bills when any number of medical malaise hits.

These are the riff-raff, who steal articles from open garages- hint, hint and then sell them at numerous thrift shops for fast cash and a fast-track to more drugs.
I have mentioned before that many parks here on this part of the Island have yellow boxes affixed to trees asking the addicted to deposit their scuzzy needles inside so as not to leave them laying on the ground.

This homeless/drug problem is one of the dark clouds hanging over the area nearer the Island Highway. Although many people won't say it out loud, many of these people are Aboriginals. You see them in the open spaces along the Island Highway, under the trees with empty booze bottles haphazardly strewn about.
These so-called homeless which life may have dealt some bad hands, cower and cuddle up in the doorways of many businesses.
They leave garbage behind.
They urinate on buildings and defecate in corners.
They yell and scream obscenities.
They stand at busy street corners holding signs saying "help me, I'm hungry".
Yah, well, try eating something rather than shooting crap into your arm or living life through endless bottles of cheap booze.

You are right!
I have little patience for this as many Islanders do. I know it's a thorn in the side of municipal officials and people just trying to run a business and provide for themselves and their families.

Even in beautiful Victoria last week, a gal wearing white earplugs and dressed nice-enough approached the Mister and I asking-
"Do you have a dollar?"

What happened to-
"Hey Mac, ya got a quarter for a cup of coffee?" or "Ya got an extra cigarette?"
The answer was still no but it was a way better deal if one decided to submit.
Posted by Rob Reid at 12:27 AM