I just attended Toronto's World Pride Parade  on Sunday.
I wasn't on a float.
I didn't march with Kathleen and Justin this year but I did see a lot of hot men.
Very Hot Men.
However, I must repeat my opening remark: 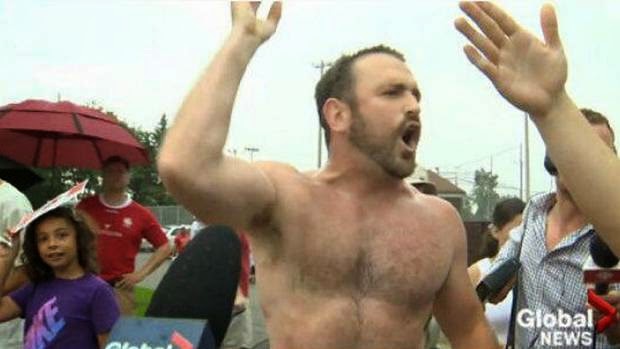 Joe Killoran is HOT ! HOT! HOT!
If you've been hiding in the shade of a maple, sipping lemonade and vodka martinis this past while, let me tell you that "Shirtless Jogger" a.k.a. Joe Killoran, gave old Robbie Ford the one-two-three verbal punch as he was walking in an East York Canada Day Parade on Tuesday.
He called our Robbie a "racist, a homophobe and a liar".

Finally someone said it and it just happened to be a hot, hunky, hirsute, handsome, homme who teaches Secondary School for a living. Good God, I don't remember my High School teachers looking like Joe!

Look at that handsome face.
Those pecs.
Those arms.
That chest!

He makes me damp.

Now, someone should give that boy an underwear ad contract.
Treat him like the piece of meat he is.
He deserves it.
Whip ~snap~ him into shape!
Let's see him posing in a photographer's studio in speedos, black underwear, a bit of leather or absolutely nothing at all.
A dozen 8x10's s'il vous plait.

You would think after seeing all those boys in various states of undress at Pride on the weekend, that my needs would be numbed...and they were- until Joe- The "shirtless jogger".

Is Joe single?
Is he Gay?
What streets does one normally see Joe jog along. Oh, no particular reason but if I was in the neighbourhood...

I don't jog but I would if Joe asked me to accompany him.
Oh, sooner or later along the way, I'd feign a sore ankle and he'd have to swoop me up in his beefy arms, cradling me to his hot, hairy, sweaty chest and jog me to safety.
I could wipe him down with a cool, damp towel.

I hope he does a personal appearance tour.
There are so many questions I need to pursue.
I wonder if he can make his titties jump when he flexes?
Does he sculpt his hair?
What size shoes does he wear or does Joey jog barefoot as well as barechested?

I am sure the answers to these questions- and more, are forthcoming.

In the meantime- enjoy. Holy FYCK! and I mean that. I really do. 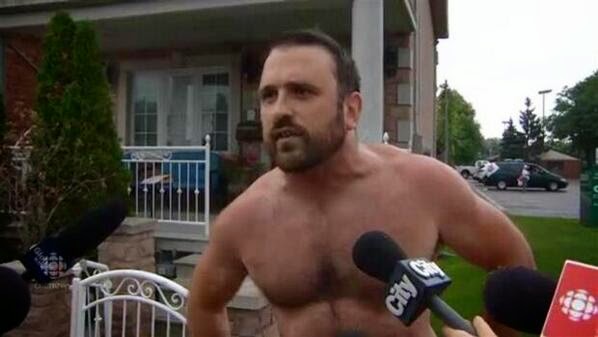