Thou shan’t and can’t have any other Gods before me.
Really?
Here’s a few to nosh on.
Hotei.
A God with a big belly and a wealth of resources who has attained the wisdom of Buddhism.
Fukurokujyu
A God with short legs who prophesises events and performs miracles for the betterment of mankind. No floods. No wars. No fire. Just a God that does good. We wouldn’t have a God without “good” would we?
Bishamon
Now this fellow wears some armour and has formidable strength. This God has a military fixation- like America, and considers himself/herself both a missionary and a warrior- yet virtuous! How’s that for multi-tasking?
Benton
A lady God, who appreciates art, literature, music and eloquence- much like me. A cultural Diva. We should meet and have coffee. She has the ability to play music and keeps a serpent by her side. Read: She likes the dick. Such a perfect God. One that all Gay men would and should worship freely- if we were so inclined to bow down to anyone other than Ryan Reynolds clad only in a speedo…
Ebisu
This God likes fishing and is a tradesman. He probably wears his jeans low so when he bends over, the crack of his ass is there for all to see and marvel. He believes that honest work makes one a better person. Yikes! Honesty in a God? Too bad this guy doesn’t smack a few political types up the side of the head.
Daikok’i
A Happy God who toils the earth and digs farmers. He is said to have a good sense of humour and loves being happy. He carries a sack of treasures- filled with expensive watches and shiny jewellery, which he has slung over his brawny back. I am really starting to like this God. Happy and "bling" all in one package. His wealth is vast and I am sold. Sit this guy down with Benton and the world could be a beautiful place. Food from the land. A few laughs and "bling".
Does it get any better?
Jurojin
A God who believes in longevity. I think he means years not in physical attributes.
This chap shows his age by sporting a white beard and carrying a staff in one hand- to help him amble along. In the other hand he has a scroll that contains all the wisdom of the world. He also carries a straight pin whereupon the pin’s head, all Stephen Harper’s wisdom is written! 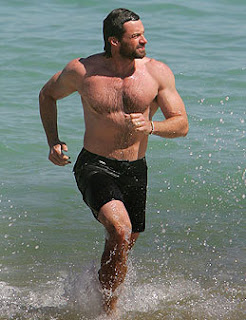 Hugh Jackman.
He sings. He dances. He acts. He looks good on the beach.
Good God!

This chap is quite giving- especially to men. Believe in Him, make the ultimate sacrifice and you’ll get seven thousand virgins, four thousand women and a selection of whores. Now that may mean Hors d’Oeuvres. The translation is sketchy but it sounds like a party! Now about the virgins... It seems a Virgin from Mohammed is the gift that keeps on giving. You can plug any number of these Virgins and their Virginity miraculously comes back for another go next time.
Hmmmm.
One man.
One cock.
A few thousand vaginas.
Seems hard to believe what this God offers the men- don't you think?
Oh yes the women. Gals, you can have two husbands if you want to.
No pressure because you really don’t matter that much. You’re only as good as the next stoning. 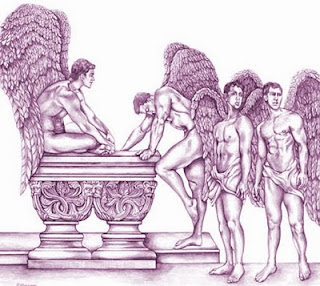 Emmanuel/God/His Son the Christ/The Holy Ghost
This Christian/Jewish model tries to be all things and wants to be numero uno.
This omnipresent creature kills his people with floods and fire. Tells his people what to do and where to go. Performs miracles- although the major miracles were a few thousand years ago now. He demands people to follow his commands- especially his “Top Ten” list. He needs lots of hero worship and expects everyone to bow down and love him and shower him with praise. Oh and if your God is Catholic, he likes to see a lot of gold and rich tapestries about. God likes the Catholics for that. The Baptists and the Mormons- not so much. They yell and scream and talk about living on far off planets. God divides his people into many, many religions- all ultimately looking for his love and compassion.
Like that’s going to happen
This God laughs a lot as he sits in Heaven- which is just a few thousand feet above the cruising altitude where Air Canada flies daily.
Bullshit baffles brains.