ROBBLOG #781- Don't Let Me Be Misunderstood

The Mister and I were riding our bikes along the trail towards Mount Prevost the other day.

At one point a lively caramel-coloured rabbit flew out from the underbrush and ran excitedly along the trail in front of us. After a few metres he exited- stage right, into a thicket.

I thought I heard a female-type, rabbity sounding voice say-
"Harold are you back already with the carrots from Mr. Grenfeld's Garden?"

"Not exactly..." was Harold's reply, "You see Mabel, I was about to cross the gravel path to Mr. Grenfeld's yard when all of a sudden two huge metal contraptions with humans sitting on top almost knocked me sideways!"

"What in the name of a Rabbit's Warren are you talking about?"

"The machines! They were very fast and I thought they were going to run over me right there and then!"

"Hog Varnish!"
You could tell Mabel was mad.

"It's just two human's- like Mr. Grenfeld and that contraption? It's a bicycle. They were riding them
for exercise. Really Harold. Don't you know anything?"

Harold pause briefly and said- "Well, I know I didn't get the carrots!"

"Ugh"
You could hear Mabel's exasperation from the gravel trail.

After the ride, I got to thinking about the animals I had when I was a young lad, although I don't remember any of them carrying on a conversation with me or any another animal for that matter.

In the Years before I turned to the ripe old age of ten, I had a menagerie of pets including a raccoon, several turtles- including tiny ones from the pet store which I kept in a plastic bowl that had a small palm tree in the centre, a white goose and finally a small black dog named "tippy" so-named because of the white tip on his tail. 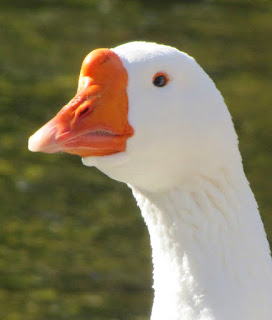 The raccoon lived in a chicken wire enclosure but would come out to play on the green lawn between our house and the lake where we all lived.
I had him from a baby.
I presume he wandered onto our property and stayed. Dad built him the enclosure for his safety since our property backed onto a forest and other wild animals lived there who could do him harm.

The turtle I had wandered across the road from Smith's Bay in Lake Simcoe to a marshy area bordered by Forest Avenue and Victoria Crescent. I remember Dad stopping our old '42 Ford to let the turtle pass and like any kid I probably said- "Dad, can I have him as a pet? Oh, please!"
My Dad- as any Dad would, got out and picked the wayward turtle up and put him in a cardboard box next to me in the rear seat. Maybe I called him "Charlie". I'm not sure.

One September in the late 1950's, Dad was given a white goose. She was beautiful and he intended to fatten her up for Christmas. She lived in a pen with a wooden enclosed that had a trap door. If- let's call her Hilda, if Hilda was resting in her little, wooden house I could peek in on her through the trap door. She was as white as snow and honked when you addressed her by name.
"Hilda!"
"Honk, Honk!"
I think I got to understand her quite well and I loved filling her bowl with "Goose" Food- mostly grains I think that Dad bought from the Co-Op store that was alongside the CN Rail Tracks on Neywash Street.

Hilda did put on some weight as my Dad had hoped.
However, we all got so attached to her- Mum included, we didn't have the heart to end her life, so she lived and we had Turkey that cold, snowy Christmas.

The final "pet" from my years living on Lake Simcoe (1951 through the summer of 1960) with Maw and Paw, was a small, terrier-type puppy that we named "Tippy". He was all black, had the sweetest brown eyes and a tiny tuft of white hair on the tip of his tail.
I presume by now you have figured out why he was named "Tippy".
If you are smiling a big, warm-hearted smile right now, you may not want to read this next bit.
I don't remember having Tippy for a long time. Certainly not years more like months- I think.

Anyhoo- and here's where you might want to skip down to the next paragraph, one fine summer day Mum was backing the old, black Ford- the one with the rumble seat, out of the drive to head into Orillia to go shopping. Unfortunately, Tippy crossed the drive behind her and, well...... 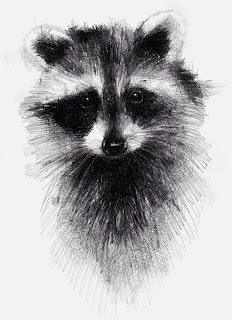 As I look back at the animals I remember having as a kid- to the best of my memory, I never had a cat. There was a cat I remember cuddling and petting at my Grandparent's house in town on Front Street, South. My Grandma Lillian used to place milk out for her in lovely, little, china bowl- my Gram did everything with such style. I loved to watch her little pink tongue lap up the cold milk. Milk that was probably more natural and certainly free from the chemicals that prolong the shelf life these days. She may have been strictly an outdoor cat but I know Gram fed her inside the sun porch that ran along part of the south side of 217 Front Street, South.

Next door was a paddock in front of Davey Park's barn where several draft horses spent their day when they weren't hauling logs or hay or whatever needed animal power for hauling. The gigantic animals would come to the fence for a scratch on the forehead or a handful of overgrown grass they couldn't reach from their side of the fence. It seemed magical.

Not only have all those animals from the 1950's passed on to their "greater reward" of course but so too Norman and Lillian Reid- my Grandparents- Dad's parents. They left this earthly plane an eternity ago in 1963 and 1965 respectively. A few years ago, their white stucco, two storey house that held so many wonderful memories was leveled and in it's place a new Ford Dealership was built.
My Grandmother would not be pleased nor would Hartly Foster.
Hartly? That's another story for another time.

I still love to get close to and "talk" to horses. Here on the Island I see a pair of horses every time I ride my bike. As soon as I stop alongside the gated fence, they whiny when they see me and saunter over to say hello- maybe to get a handful of long grass.