March.
Time marches on.
The months march by us.
People are marching.
We're on the move.

All of those things and more.
We have bought a new-build house in Duncan BC.
That's on Vancouver Island. 45 minutes from Victoria. About 30 minutes from Nanaimo and across from Salt Spring Island on Vancouver Island.
That's all in the past two weeks and the big news- our home (I talked about that in the previous RobBlog) has sold.
First viewers.
4 hours later after the first showing we were presented with an offer.
Real Estate is nuts here in Orillia Ontario. The house sold so fast our heads are spinning. We just have a buyer inspection of the house and property and then it's a done deal. So, baring the inspector finding termites, asbestos, dry rot or some other fun stuff, the official sold stamp goes on the property.

I don't think it has sunk in yet.
We're moving.
West.
To Vancouver Island.
The closest one can get to paradise in Canada.
Mediterranean climate. Palms. Yuccas. Huge Rhodos. Arbutus Trees. Monkey Trees and no snow.
Well, hardly any. This year has not been the norm. Islanders have not seen the amount of snow they had two weeks ago- the day before we landed from Toronto, in 60-70 years! Usually, if there are a few flakes on the ground it disappears in a few hours.

The Island is wonderful. Besides the green grass and the copious plant life, the views of mountains and ocean are nothing short of spectacular. The Malahat that goes through the mountains just south of Duncan is amazing. You can feel your ears pop as you drive up! 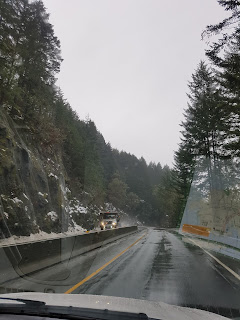 Duncan BC is about the size of Orillia. A nice city with lots of downtown shops and culture.
Our house has a view of Mount Prevost and we are 10 minutes from the Ocean and Salt Spring Island. If we want something busier, Nanaimo is about a half hour away and the beautiful ocean-side city- and provincial capital, of Victoria is less than an hour. We strolled through the Empress Hotel and the grounds of the Provincial Parliament Buildings next door. There are palm trees in the harbour and a cherry tree was just coming out of bud- in Mid-February! 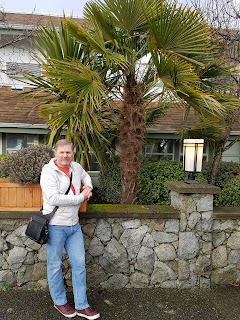 Yes, it feels daunting and scary but we have no regrets.
Goodbyes will be difficult as we'll be closing the door to Pine Tree House for the last time.
We'll suck it up and look to the future.
It's all good.

Now we'll be 5 hours from one of our favourite places on earth- Honolulu. Australia looms closer but London and Paris will be a longer flight.
That was all considered as part of our decision to go but ultimately if we don't do it now- at this age, we'd probably just stay put.