Firstly, I realize I have to get myself a new head shot.

I like this one done by my friend Seanna. It's a few years old but then, many "actors" tend to latch onto a head shot they like and continue to use it until they're 80! If I am going to come clean, I should represent myself as I look now. The photo below is not a professional shot. It's a selfie I took in Victoria a couple of weeks back. At least my Samsung phone smooths out the "wrinkles". I need my friend Beav- aka Seanna, to take a nice, professional shot. It's just that now she's three time zones away in our Nation's Capital.
Shit! 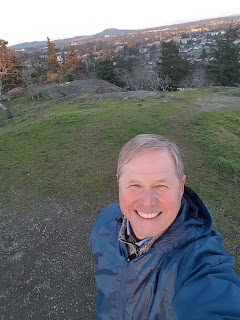 Now another matter I intend to come clean about.
Anyone who reads this Blog of mine- especially the Easterners The Mister and I left behind, know that I wax poetic about the mild Mediterranean climate and the lack of cold and snow on this beautiful Island called Vancouver Island just off Canada's west coast.

This Island and its lifestyle deserve to be bragged about.
It is remarkable.
Only, now, today I must come clean.

That arctic polar vortex the eastern half of the country has been dealing with, hasa decided to nip around, biting us in the arse while it visits this most western of provinces. For the past week there have been a few warnings that snow was coming along with cold temperatures. We all just literally "poo-pooed" the forecast until the weather prognosticators ramped up the rhetoric over the weekend. Sure enough, Sunday evening as we sat at a local restaurant enjoying Chicken Parmigiana, we could see some flakes floating about outside the restaurant window. It looked like dandelion fluff to be honest but when we headed for the van in the parking lot after dinner it was more than fluff.

To come clean, the "fluff" continued overnight and by Monday morning the island was in a flap. Appointments were cancelled. People stayed home from work and school. Roads were ice. Sidewalks snow-covered with white stuff and green lawns were disguised as arctic tundra under the sheet of snow.
I cannot tell you a lie.
We had snow and Monday was the coldest day I have felt on the Island in a year and a half.
I hear the snickers and can imagine the smirks but you have to admit, I have come clean.

On Sunday I covered the crown of my palms with doggie pee pads. That's the blue in this photo below. The crown is where the new fronds grow and I am told this is the most tender part of the Palm- especially if it's a young palm. The forecast said we'll have a few nights of -6c, so The Mister nipped over to Dollarama to buy a few packages of the Pee Pads- for canines. I stuffed them into the crown and hope the ill winds are kept at bay. 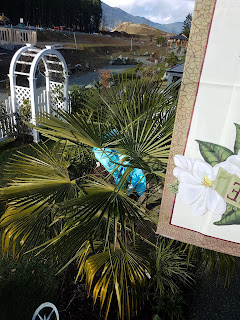 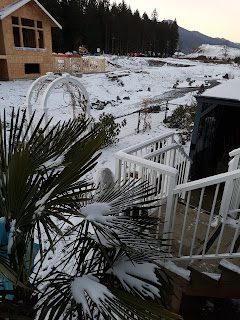 Now, it's not much snow.
I realize that.
Compared to 25 to 40 cms of snow covering the ground in the east- or in Winterpeg, it's a drop in the winter snow bucket- but here? It's a "happening."
This cm or three would have melted today- if the temperature wasn't so fucking cold.
However, this arctic blast is prohibiting the sun's warm rays from melting the blasted stuff. It was quite cool walking Koko- our mini-schnauzer today.
Why, it was only -1c.
I had to wear gloves!
Brrrrr.

There you have it.
I thought I'd come clean by scribbling down a few lines and add a photo or two just to let those of you across Canada who live outside of our Mediterranean climate zone know that we do get winter- occasionally.
It is Canada after all- said a neighbour of ours today.

This brutal cold is to last until February 18th when the plus 1 and 2 degree temps will inch upwards to 9 or ten degrees.
It's only fair.
Last week cherry blossoms were blooming.
Snowdrops hugged the edge of sidewalks.
Purple heather covered the garden.

Meanwhile, I am waiting for my Camelias to bloom along the south side of the house.
I mean- it's February after all!
Posted by Rob Reid at 7:07 PM