Islanders sometimes ask- why did you move here from Ontario?

"We retired"- we say and add, "but the number one reason is the weather".
Now to be sure, The Cowichan is not tropical.
Yes we have palms and bananas and lots of green in January and February but-
It's not Hawaii and it's certainly not south Florida.
It is a Mediterranean climate- not unlike London and area in England, giving this area of Vancouver Island and south to Victoria- British Columbia's capital, the best we have in all of Canada.

There is snow at times on the island especially up island in the Courtney/Comax area on a mountain called Mount Washington. There can be snow a bit further north in Campbell River too.
Flakes can fall in the Nanaimo area and sometimes in Ladysmith about 25 minutes north of us but rarely here and if it does, it's gone as quickly as it came.
A picture is worth a thousand words... 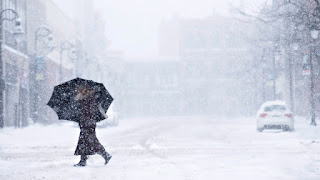 I do not miss this scene one bit. In fact it looks a bit surreal.
25 to 30 cms and more snow fell in many parts of the east- and cold?
Fuck yes!
-25 to -30c temperatures and lower!

A friend in Ottawa texted me that she had to go out of the house Sunday to do some grocery shopping.
She didn't want to go. I wish I could have held her hand and told her she'd be fine. Cold but fine as long as her car started and she could find a parking space with all the snowbanks about.
Ottawa was the coldest capital city in the whole, wide world on Saturday and Sunday wasn't much better.
Take heart.
January is almost through.
I hated it when someone said that to me back in Orillia, Ontario.

Here on the Island, this was my Sunday January 20th on top of HighRock Park summit in Esquimalt not far from the Pacific Fleet Naval Base in Victoria. My face is lit by the 4 pm sun.

Now look, I am not saying there's room for all of you Easterners.
There simply isn't and many of you would never give up the East what with work, families and homes. I am not suggesting all of you do but what I am saying- if you are ready in your life for a change, a great change, this might be the place.

If you are flush with funds, the idea of living six months of the year in Ontario, New Brunswick or Nova Scotia and then six months in Trumpland might just be the ticket. For us it wasn't a consideration. The insanity that is America these days is just not worth it and this move west has been well received both by us and the new people we have met- many of them Ontarians.

Many Islanders want to keep this climate and this "place" a secret and wouldn't appreciate me telling you all this but look- you won't hear about it on TV or in the newspapers.
Did you read one story over the weekend about how nice it is here with 8 or 9 degrees, green grass, ocean and no ice and snow on the roads?
I'll bet you didn't because the only thing that makes weather news this time of year across CANADA is how fucking cold it is and how it just keeps snowing and snowing and snowing.

We have tulips and daffy's pushing through the earth. Snowdrops are out and today I saw many rhododendrons in bloom already and Heather- purple and white, in huge, colourful, flowering bunches. We are just a few weeks away from cherry blossoms.

So, keep this stuff just between you and me and don't think about moving here when you're in the middle of an Ontario or Quebec June or July because you won't and the reality of winter- like the photo further up this page, will be a distant memory.
Posted by Rob Reid at 1:03 AM